The museum itself recently underwent an RFP process for an agency of record that could accomplish multiple goals:

The National Corvette Museum and Advance Travel & Tourism partnered together to begin a campaign that was heavy on awareness to attract more potential visitors as well as engagement and planning tactics to increase ticket sales and conversions on site. As the museum is undergoing a bit of a redesign, both in their offerings and strategically, a “market by exhibit” approach was taken to highlight new exhibits coming to the museum that would be of interest to a fresh NCM audience.

The audiences we primarily targeted were families with children and Corvette owners or general car enthusiasts.

Increase visits to the museum by 10% over current benchmarks

Constant communication and optimization based on campaign results 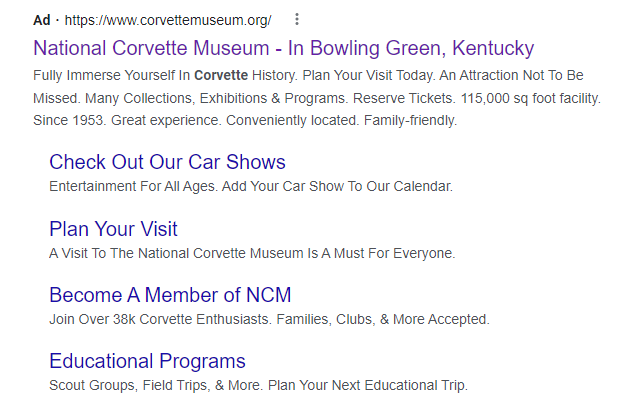 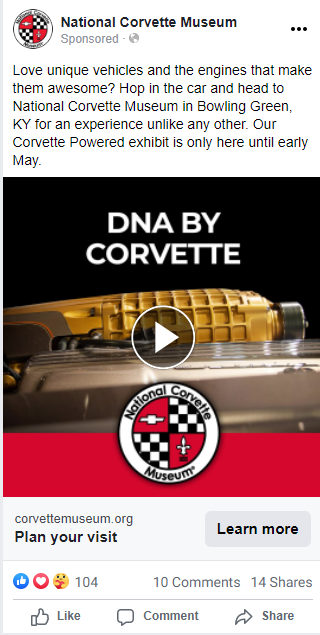 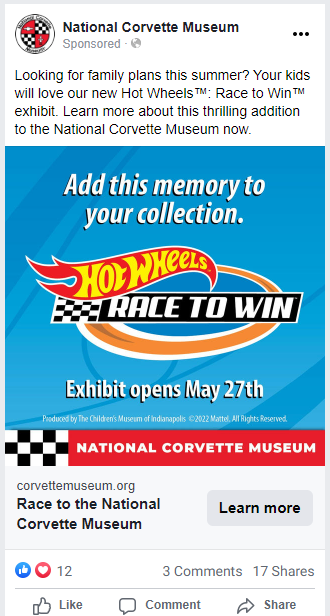 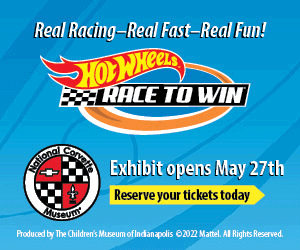 If you want to learn more about our partnership National Corvette Museum or any others, connect with us here. We would be happy to talk more about how a strategic and thoughtful digital marketing campaign with us can directly influence your visitation.

Working with the Advance Travel and Tourism team has been outstanding! They have taken the time to get to know the brand of the National Corvette Museum and our visitor base to provide us with the tools and tactics needed for a successful digital campaign. I highly recommend them to any attraction or destination that is looking for a knowledgeable and efficient execution for their digital advertising!

It has been a pleasure and an honor to partner with a brand as iconic as the National Corvette Museum. They have a team that truly understands tourism marketing as well as how to leverage the incredible assets that they have on-site. My favorite thing about working with the National Corvette Museum team is that they know the Corvette is so much more than just a car, it’s an American legend with a rich story to tell to audiences across generations.

CONTACT US TODAY TO DISCUSS YOUR NEW TOURISM MARKETING STRATEGY

Next up on our team spotlight series: Account Executive [...]

On Friday, October 21, we presented a webinar in partnership [...]